While enjoying your days on the beach or snorkeling in the clear and warm tropical waters of Hawaii, you will most likely get to see a sea turtle, basking in the sunshine or swimming along with the other marine life inhabitants. It is important to understand a little more about these beautiful sea creatures, as well remember to respect the Honu & their environment.

Snorkeling with Sea Turtles is probably on your list of things to do while in Hawaii.

While you may think it to be safe to touch them or get close, it is best to stay at least 10 feet away from the Honu’s. In fact, sea turtles are protected under the U.S. Endangered Species Act and other Hawaii State Wildlife Laws.

Should you encounter a Honu sleeping on the beach PLEASE keep your distance and do not disturb him/her. Often times when turtles feel threatened or annoyed they will exhibit signs such as “yawning” and opening and closing of their mouth or “flipper swipes” in which they use their flippers to swipe over their foreheads. In sea turtle language this means “please don’t bother me”.  After all no one likes to be bothered or interrupted when taking a nice afternoon snooze!

Our Oahu snorkeling and tour guides at Hawaii Real Nature Tours love to share our knowledge on Honu’s, other marine life and beautiful sights found on the island of Oahu. Check out one of our snorkeling tours, sightseeing tours or private tours that we have to offer! Make sure you see all there is on your tropical Hawaiian vacation! 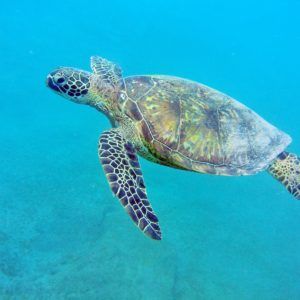 A Little More About Hawaiian Sea Turtles – “The Honu”

There are 7 different species of sea turtles in the world, and ALL 7 are considered endangered or threatened. Three of these species of sea turtles inhibit the Hawaiian Islands and many times can be found napping in the sun on one of the many beautiful beaches. While sea turtles are definitely beautiful and intriguing creatures, these ocean reptiles should be given their space. Many times during our snorkeling tours, you will see a sea turtle, or as natives call them Honu, swimming amongst the fish looking for seaweed (limu in Hawaiian) to munch on– truly one of the best sights to see on one of our amazing snorkeling adventures here on Oahu.

Remember to respect the Honu & their environment. Let’s keep them thriving for futures to come!

Want to join us on a snorkeling tour adventure? Contact us or book one of our tours online!

Get In Touch With Us: