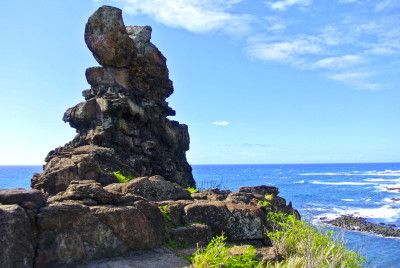 Pele’s Chair – “This large volcanic rock formation, resembling a throne of sorts from certain angles, gazes out over the ocean on the Ka’iwi Coast of O’ahu’s south shore. The chair itself is quite massive, only further eluding to the power of Pele. The throne creates an awe-inspiring image of the mighty goddess staring out over the islands, as if she knows she owns it all. The greatness that is often associated with Pele can definitely be felt at this location, with the combination of Hawaiian culture and beauty.” ( Source:Trails of Freedom)

Waikiki Healing Stone – “In Waikiki, along Kuhio Beach, four particular stones stand together embracing a collective legacy within Hawaiian history and culture. Oral traditions tell us that, before the reign of O‘ahu’s chief Kakuhihewa, four individuals came from Tahiti to the shores of Waikiki bringing with them tremendous healing powers.” ( Source:  BY KARYL REYNOLDS) 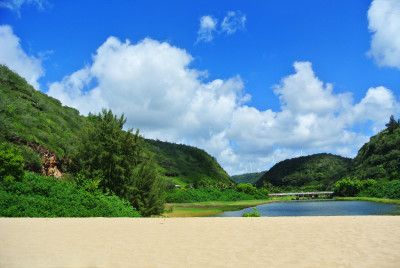 Waimea Valley – “Waimea Valley is an area of historic cultural significance on the North Shore of Oahu, Hawaii. The valley, being an important place in Hawaii religion, includes several historical structures including stone terraces and walls constructed during the time of the Hawaiian monarchy. Much of the garden floor was once cultivated for taro, sweet potatoes, and bananas, with new crops and orchards introduced by Europeans after their arrival.” (Source: wikipedia.org)

Makaha Valley – “The great hero Maui was supposed to have settled first on the Waianae Coast, and it was there that he learned how to make fire. There is also the Legend of Makaha.” (Source: wikipedia.org) 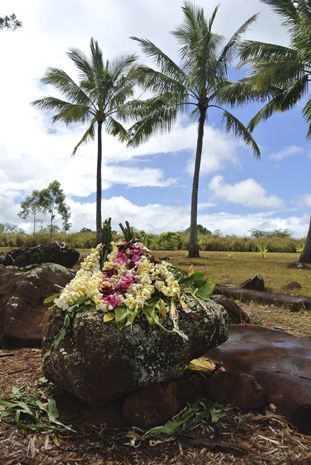 Kukaniloko Birthstones -“Kukaniloko was one of two sites set aside for the birth of royalty in Hawaii. The Ali’i were the managers of people and the land, and were thought of as gods. The Ali’i gave birth here because of the mana, the spiritual entity, accorded the royal child. The child was normally born in the month of August, when Kukaniloko was a flux of mana, and the gods would recognize the child born here.” (kukaniloko.k12.hi.us) 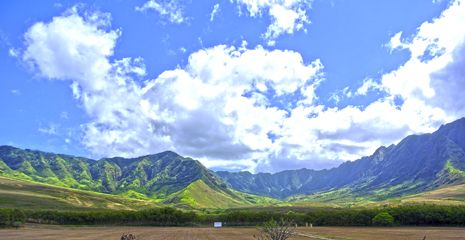 Makua Valley – “Legend has it that Makua Valley was the place where the man was first created. Conversely, Hawaiians consider the valley to be the point from where souls depart for an afterlife once the human form has been cast off.” ( Source:Trails of Freedom)

Explore these Magical places in Oahu, Hawaii with a private tour. Call 808.304.9193 to set up your tour today.