Not only is Hawaii known for its incredible beauty, Hawaiian culture, warm waters and sunny days, but also its big wave surfing. As island locals and Oahu tour guides, we’ve seen the power and force that nature produces.

In fact, the island of Oahu is a well known Big Wave surf spot by professional surfers and home to many famous Big Wave competitions. Although you can definitely surf in Hawaii all year round some months are better than others. These months are part of the two best surfing seasons – The Winter Season and the Summer Season. While they differ in overall wave size, they both other killer surf sessions to pros and locals alike. 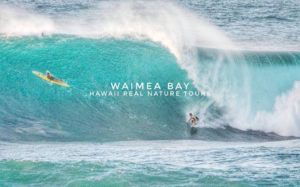 Changes in the wind and the storm patterns found at sea cause different size swells hitting different facing shores.

The Quicksilver Surf contest, held in memory of Eddie Aikau, kicks off it’s opening ceremony on November 29th. However, this big wave surf classic is only able to be held when surfing conditions allow. In fact, over the past 28 years the competition has only been able to be held 8 times due to the size of the waves and other hazardous surfing conditions on Oahu’s North Shore.

While most of us probably won’t be going into the treacherous waters on the North Shore beaches when surfing conditions are rough and the waves are enormous, there are still safety precautions to follow even as spectators. Another word of advice for those wishing to get a glimpse of these incredible ocean waves, do not try to plan part of your vacation around when to see the waves. While we know that big wave surfing conditions are prevalent in the Winter months, conditions and storms at sea often occur without warning changing the size and dynamics of the waves, so you never know what the waves will be like. Instead opt to check the weather and surfing reports while on vacation, and stay updated on when you might get a glimpse of the Pacific’s winter time giants!

Hawaii is definitely on the map and is known throughout the world for it’s incredible winter waves and Big Wave surf opportunities. Knowing your boundaries, limits and ocean safety precautions can make all the difference, even if you are just an excited onlooker from shore! Stay safe and enjoy the beauty of our Hawaiian Ocean!